May all beings be infinitely happy and free from suffering.

A Scientific Perspective of One-ness

Quantum Physics - Everything Is Energy

A great place to start for many of us (especially those of us from the west) will be through science as this tends to appeal to our more logical, left side of the brain. And there is now so much amazing scientific information available on the internet and through a wonderful array of  scientific experiments & studies, that we can now really start to bring ourselves to a closer understanding about this.

To start with, let's open ourselves up to the idea that everything is energy or vibration. This is now a proven fact of quantum physics which explains to us that each atom, the things that make up our entire physical universe, are made up of energetic vibration. In simple terms, physical things are all vibrating. Here is a really simple and wonderful video to give you the science behind this very essential concept.
So we now understand the basics about what our universe is made up of - energetic vibration. The car you drive, the television you watch, the chair you are perhaps sitting on right now, even your body - it is all made up of a series of energetic vibrations which collectively make up that physical object. And for those of you who did watch the video, you may have also picked up on the more subtle issue that there seems to be some sort of intelligence operating within this energetic vibration - something which we find very interesting!

What Does Science Say About One-ness?

Ok so moving on now and in more recent times, through the efforts of Dr. John Hagelin (and many others), we are now starting to see the emergence of what was labeled as the discovery of the 'Unified Field'. Dr Hagelin claims to have pulled together over 300 years of scientific data to create a new scientific paradigm; one which introduces the idea that everything in our universe stems from one unified energy source.

Not only is everything energy or vibration but these types of modern science are suggesting that there is also an interconnected-ness to this energy. That at the sub-atomic level, everything arises from one source of energy - the one-ness which we were speaking about. It is incredible to think, that science is now starting to bring a theory together which says that we are all one. Again, we would encourage you to watch the below video to understand this concept in more scientific detail.

So continuing on from these discussions about one-ness then and now expanding on this concept - let us introduce here some experimental data which comes from Washington DC from 1993. In this, the murder capital of the world, four thousand volunteers came from over one hundred countries to collectively meditate with a view to have a tangible effect on the surrounding area.

It was predicted in advance that with such a large group meditating, there would be an exact 25% reduction in violent crime as per the FBI’s statistics. The chief of police in Washington at the time said that it would take 2 feet of snow for a 25% crime reduction to actually happen but as these experiments continued, slowly but surely the police force became more interested in the experiment until by the end of the summer, they actually became a collaborator and author of the study!

﻿The official results showed a drop of 25% in violent crime in Washington DC over the summer! 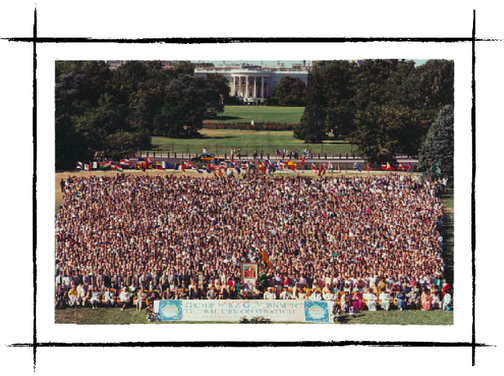 The reason why there could be such an accurate prediction made for this Washington experiment was that there had been over 40 previous experiments conducted of this kind across a range of different locations, all being done on a much smaller scale. And it is the results from these series of experiments that have been labelled The Maharishi Effect or The Meditation Effect.

A Spiritual Perspective Of One-ness

It is often said in many different spiritual scriptures that one of the most important teachings that a person can receive is the teachings on one-ness. Often referred to in the Buddhist tradition as emptiness, it is said that a realisation of this concept will bring about a very deep understanding of love, compassion, truth and wisdom into one's consciousness. This understanding continues to blossom and grow until we reach a state of full awakening or self-realisation.

A realisation of one-ness will also bring with it a very deep understanding about the concept of 'self' as we start to digest and accept the idea that we are actually not separate from the entire universe or cosmos. It is the idea that we do not stop at the end of our physical bodies, but we expand throughout all time and space. Within us lies a truly infinite divine potential of nothing-ness, emptiness, purity, love, light, compassion, bliss or whatever other word that you can think of to describe this state of being.

Sadly, many of us may never understand just how important these types of teachings are in helping to bring us to higher and more happy states of vibration. Of course, we all share a very deep and innate wish to be happy and free from suffering however we seem to go about our daily life in a way that seems to contradict this very deep desire. Bringing a deeper understanding of one-ness into our consciousness can certainly be a great place for us to start working towards more happiness, love and understanding in our life!

Take for example the idea that someone is feeling depressed, anxious, upset, alone, guilty or another kind of difficult emotional state. Perhaps they take some time out to do some meditation or personal reflection.  Closing their eyes, they think or reflect on the idea that they are not alone and they are certainly not powerless - in actual fact, they are not different to the entire cosmos. All of infinity lies within them and they are truly capable of magical and magnificent things. Just these thoughts alone are of a tremendous vibration.

Let's take another example, you are walking around the garden, on a beach and just allowing yourself to marvel at the creation which surrounds you. Within each of those things you see, lies a divine potential of infinite possibilities, a magical and abundant source of energy thing, contained within such a small space. To marvel at our surroundings in such a way is a marvellous form of meditation!

And with this concept still in play, we wish to conclude our short discussion here with a series of short extracts from a set of channeled teachings known as The Law Of One. We hope you enjoy it as much as we do: 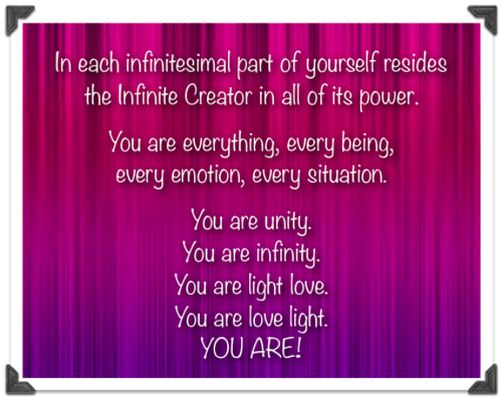