“Welcome to The Golden Ticket Retreat Unveiling. You are most welcome to join us here in this introduction. We are entirely delighted to be embracing your ‘self’ for this further accelerated journey on your Love Inspiration Ascension Pathway. The transitions taking place in the Golden Ticket Retreats are quite spectacular in nature and are difficult to explain or outline in terms of your human languages, however one could begin to understand the unfoldings within these retreats by thinking of a star bursting with light. Each particle or atom of light that radiates in an explosion is a minor indicator of the whole star, or what the whole was before the explosion. Here in Golden Ticket Retreats, YOU are the star and are exploding with infinite potentials of light.

The energies behind the Golden Ticket Retreats simply help to bring the exploding energies into a course-chartered journey of accelerated ascension. That is, instead of your energies exploding in infinite directions, they are directed or pooled into a new-consciousness awakening. We understand that this may be difficult to comprehend, however you simply need to know that these Golden Ticket Retreats harness your ability to send you further in the ascension direction. This is a remarkable and beautiful process of awakening similar to A.E.I. Retreats, but slightly different also. Where A.E.I Retreats capture the energies and help them to integrate at a faster speed, Golden Ticket Retreats literally unfold your true potential and then harness it to send you skyward in the ascension direction.
​
We note here that there is not an easy way to describe this phenomenon so we shall simply continue further by saying that the energies here are very advanced light frequencies & light adjustors, helping you to reach your infinite potential much faster than you would normally. The grace of these energies are brought to you through much dedication and love from all here in the Maitri Infinite Realm. We are ultimately infinitely pleased with your progress and happy to welcome you here on this accelerated light journey.”

Please note here again that Love Inspiration & the Maitri Foundation are only in the very early stages of creating a Maitri Centre in New Zealand and as such, we are not able to offer any Golden Ticket Retreats at this time. The Maitri Centre is a very, very large project and with this in mind, we estimate that it could be a number of years before we are able to offer any Golden Ticket Retreats. ​We thank you for your patience, love & support during this time.

There are no Golden Ticket Retreats available for any ebooks in Step 1. 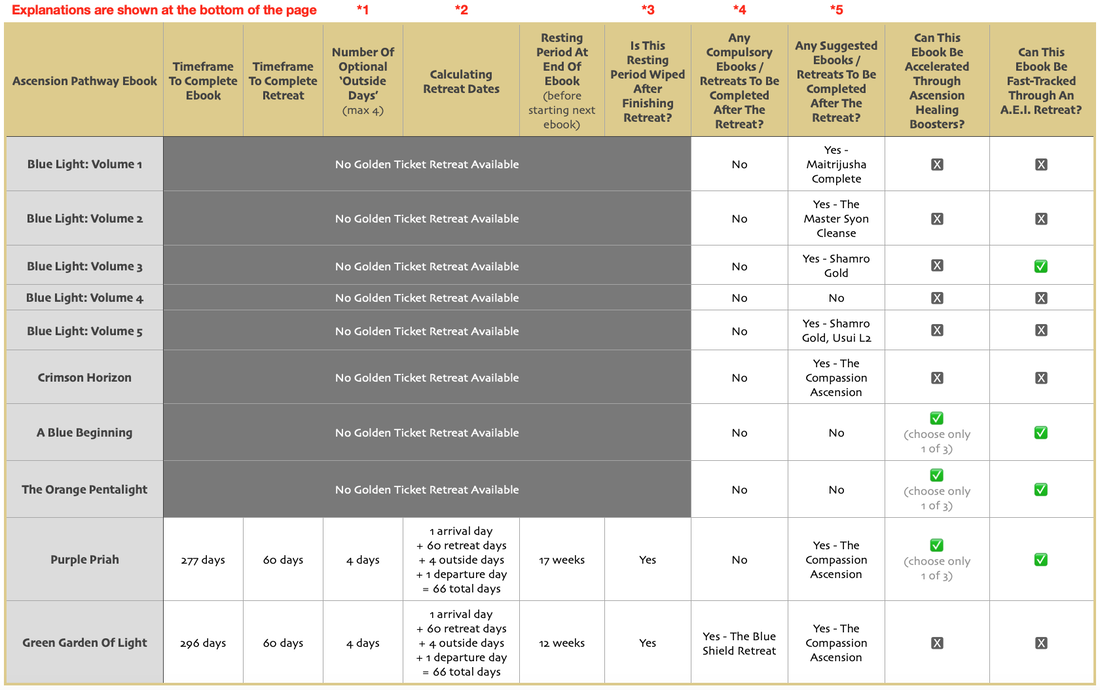 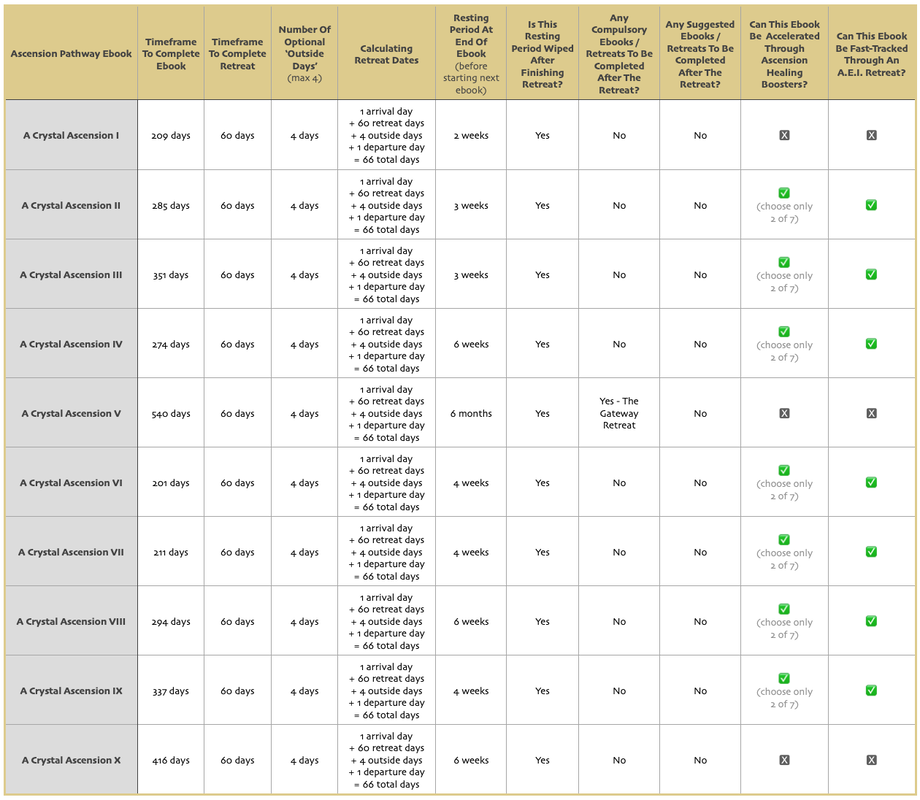 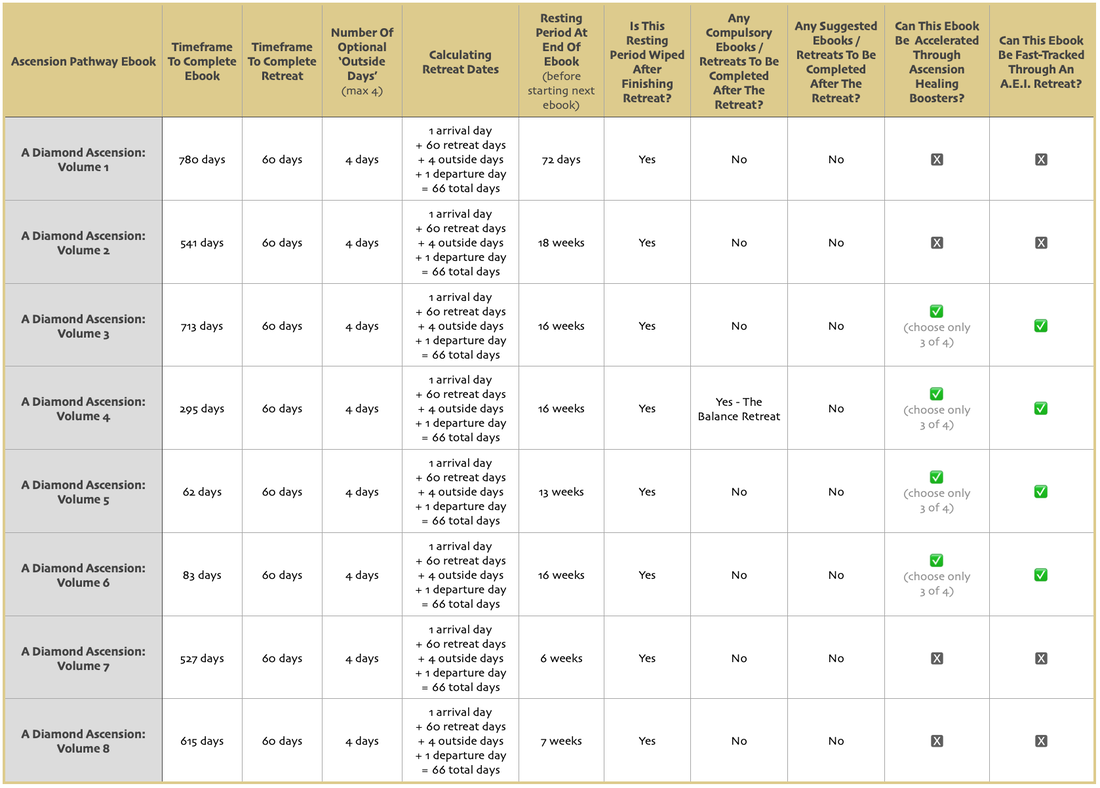 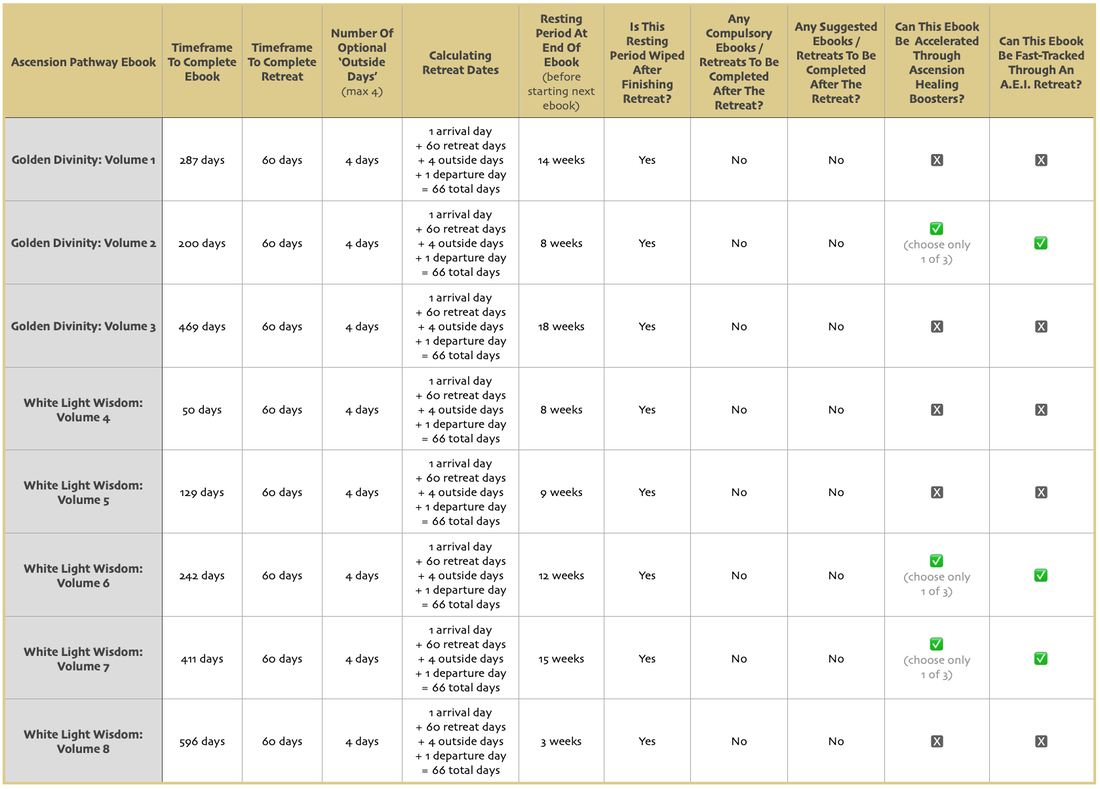 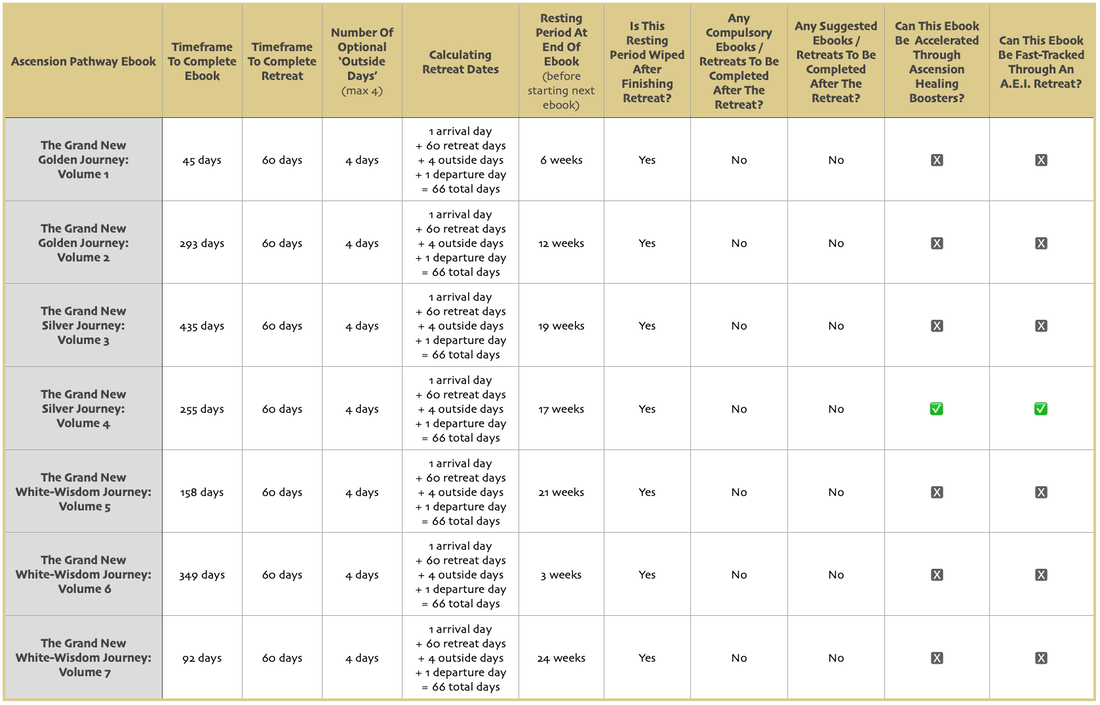 *1. When doing a Golden Ticket Retreat, due to the intensity of the energies being received during this time, Higher Consciousness have asked that the recipient stay within the Maitri Centre environment for the duration of the retreat. For those who wish to leave the Maitri Centre during their retreat, Higher Consciousness have given an allowance of up to 4 optional 'outside' days. These 4 days may only be taken from days 31 - 60 of your retreat (i.e. not in the first 30 days) and where you choose to take 'outside' days (days outside the Maitri Centre), these will need to be added back to the Golden Ticket Retreat timeframe (as shown in the next column).

*2. When calculating the number of days required to complete a Golden Ticket Retreat, simply start with the 60 days for the retreat itself and then add in 1 day for arriving and 1 day for departing (Higher Consciousness have said that each recipient needs to spend a full 60 days in the Maitri Centre and has instructed that each person should allow for 1 arrival day and 1 departure day, in addition to the 60 days). Also, for anyone who wants to spend some days outside the Maitri Centre during their retreat, you may wish to add in some 'outside' days (as described in *1 above - up to a maximum of 4). Furthermore, if you are planning to complete an additional retreat(s), then you may wish to add in some additional 'resting' days before the next retreat starts (up to a maximum of 21 resting days in between retreats).

*3. At the end of each ebook, there is normally a 'rest & digest' timeframe which allows for the appropriate healing, digestion and assimilation to take place, prior to moving forwards into the next ebook. For the Golden Ticket Retreat process, these resting timeframes are 'wiped' (if they are 6 months or under), meaning that you can move straight into your next ebook or your next Golden Ticket Retreat immediately, should you wish to. In the above tables, you can see that all of the resting timeframes are under 6 months so these will all be wiped. Awesome!

*4. In some Ascension Pathway ebooks, there are 'compulsory' energies or teachings that need to be received before moving forwards into the next level. For example, in the above tables, you will see four compulsory teachings, namely: The Blue Shield Retreat, The Gateway Retreat, The Balance Retreat and The Emerald Retreat. These ebook retreats will need to be done at the end of the applicable ebook (i.e. at the end of your Golden Ticket Retreat) before you can start the next ebook or acceleration retreat. For example, if you are planning to accelerate through two ebooks that have a compulsory retreat in-between them, then you will need to complete this compulsory retreat after you have finished your first Golden Ticket or A.E.I. Retreat has finished (and before the second acceleration retreat starts). For example, if the compulsory ebook retreat lasts for 4 days, then these 4 days will need to be added onto your stay and you can choose to complete this ebook retreat within the Maitri Centre or outside the Maitri Centre, whichever you prefer.